50", 6", VLa, Sev, diploid, terminal Y + 2-3 branches, 22 buds, fragrant. ((Autumn King x Heaven Can Wait) X Delayed Arrival).
This one begins flowering when most others have finished. It generally starts blooming late July/early August in my central NC garden and will sometimes still have flowers in early September. Beautiful, tall, arching foliage makes an impressive clump. The color is mauve, becoming more pink as the day progresses. I've bloomed and kept many from this cross, and this one has consistently been my favorite. Scapes are at varying heights. Early morning opener. 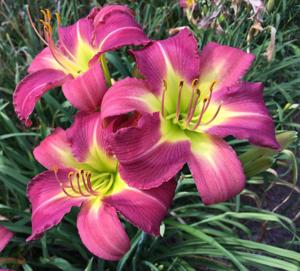 Years ago (it was actually over three decades ago!), I started working with late blooming daylilies. At that time, there were not many late tets on the market, but there were late and very late dips. I chose to use Dr. Stout’s Autumn King (1950) which is a very late, tall (registered at 54” but I remember it being taller), yellow self. I much preferred the plant habit of Autumn Prince, but the flower of AK is larger, and that’s what I wanted…large flowered lates. I did try breeding AP with large flowers, but didn’t have satisfactory results so I continued with AK.

Anyone breeding plants the conventional way knows that sometimes what you choose as parents comes down to convenience. Since at the time I didn’t have many lates to cross with AK, I went with what was at hand. I used pollen from Heaven Can Wait (Ra Hansen 1990) which blooms mid-late. I honestly don’t remember whether HCW was still in flower when I crossed it onto AK, or if I used collected/stored pollen. But HCW had the attributes I was looking for at the time…on the late side, wide petals, and ruffles.

I ended up keeping only two late seedlings from this cross. As you might imagine, both had very plain looking flowers; the color was pale yellow with a pink wash. Well, at least I had some lates of my own that I could work with. And so, I started crossing these with mid-lates and lates that I collected over the years. It really was over the years…because some years I didn’t make any late crosses, and there was a stretch beginning in the mid/late 2000s that I went years without crossing anything, dip or tet.

I’ve encountered some roadblocks with the lates. And maybe one of these is specific to my own late line since I started with a plant that has tall scapes. But tall scapes and large flowers can sometimes cause leaning, or can just be top heavy and fall. Another issue is the time of year these plants bloom. While I enjoy late bloom (this is the reason I started working with these, I hate to see the daylily season end!), the fact that they flower in July and August in central NC means they are usually hit with high summer temperatures. In some cases the flowers decline quickly, especially when the heat index is high. While these are two factors I keep in mind when breeding/selecting, there are still some in my seedling patch that show one or both of these traits even after all these years.
I will be introducing a few lates within the next couple of years from these seedlings. 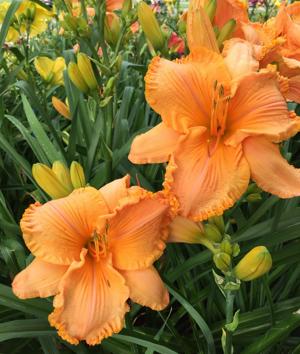 Patti Thorp (Piotrowski 2009)
($75 SF)
32”, 6” M Sev, Tet, terminal Y + 1-2 branches, 25 buds. (Trivia Pursuit X New Tangerine Twist).
Patti Thorp is another of my favorite intos, one of my best. It’s the color that I’m so pleased with…a rich, glowing orange-cream. The ruffled petals have raised ridges that intensify as the weather heats up. Lots of buds and lots of color on established plants. 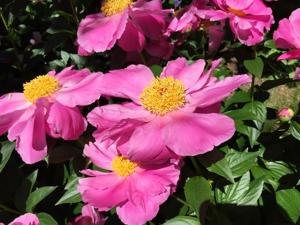 I’ve always enjoyed peony flowers, and came to love them even more when I learned that deer do not eat them! Almost all herbaceous peonies do well in the north, but not so in the south. Although I'm not in the deep south, my first goal in breeding peonies was to find which ones perform well in my area of central NC, then use those as my parent plants. Twenty-five years later, I’m seeing some results. I enjoy the single flowers, semi-doubles, and the Japanese types...they tend not to flop. I like peonies that have multiple buds per stem, especially when they open at the same time – it’s like a bouquet on a stem!
Presently, I do not have any for sale, but here are a few photos of some selected seedlings that I’m evaluating.

As of 2022, I am seeing some pretty flowers, and really good plant habits - but not always on the same plant. I'm working toward garden/landscape peonies with lots of buds and self-supporting stems. I feel that if stems carry several buds, the side buds should be equal in height or shorter than the central primary bud. This is primary bud dominance and it is not easy to achieve but makes for a better floral presentation.

Very often the best of what I see are seedling crosses but I still outcross with named cultivars. However, I'm learning that I need to follow my original directive and evaluate new plants before using them as parents because I occasionally find that some named cultivars I purchase do not perform well in my area. 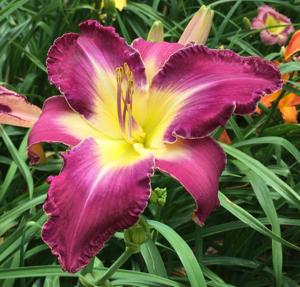 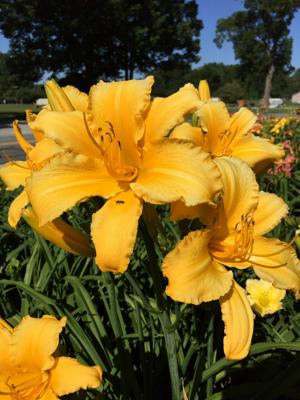 Redclay Cabana Companion (Piotrowski 2019)
(A few single fans available @ $100 ea.)
45”, 6”, M Dor, Tet, terminal Y/W + 2 branches, 30 buds. (Orange Obsession X Buttered Popcorn).
This one is out of my own Orange Obsession and is a sib to Sweet Marmalade. It’s been nine years since its sib was registered and this one has been a constant companion at my little home (cabana) during that time. Tall and bright, the flower starts out as a golden-orange self with lighter midribs, but in full sun the color lightens on the segment edges, leaving a large glowing gold throat. Mature clumps in my garden send up nicely branched rebloom scapes in early September (see photo). 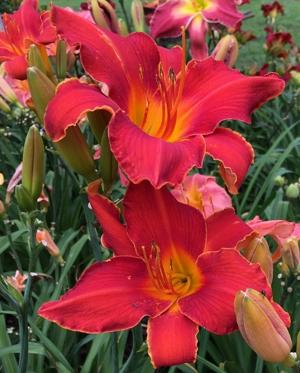 40", 6.5" EM Sev, Tet, terminal Y+1-2 branches, 23. ((Angie Alabama x Mark Janssens) X Blazing Lamp Sticks).
This plant has also been in the seedling patch for a few years. The brilliant color and taller scape make it standout among other daylilies. 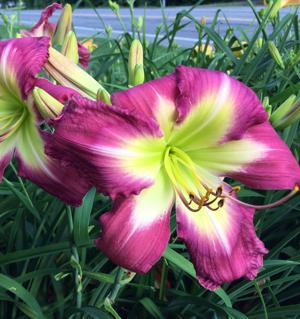